The Cycle of Violence

The Cycle of Violence is a pattern of abuse in intimate relationships that escalates over time. Not only does it continually repeat itself in an abusive relationship, it also repeats itself by emerging later in the relationships of people who experienced and witnessed violence in their home growing up. 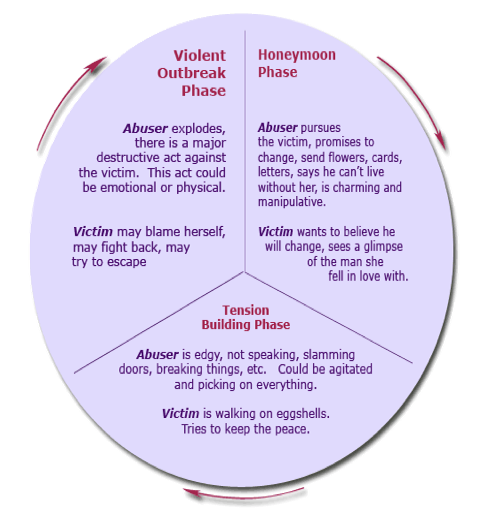 The cycle of violence is not present in all abusive situations, but it is common. Some victims report that they did not go through these cycles nor do they identify with them. However, that does not change the fact that abuse happened or make their abusive situation less than others.

If you experience the Cycle of Violence, typically your partner seems to be the person you love shortly after the last abusive incident. You hope this time will be different, that he or she will really change. When your partner becomes violent again you may think something you did caused the violence and that if you change your behavior the abuse will end.

The important thing to remember is IT IS NOT YOUR FAULT. You are not responsible for someone else’s behavior, and you do not deserve the abuse.

After several attempts to end the abuse fail, you may feel helpless and unable to make any changes in your situation. Over a period of time the violent acts happen more often and usually become more severe, unless the cycle is broken.

Center of Hope was founded in 1989 shortly after the Tennessee Coalition to End Domestic & Sexual Violence determined that there was a need for emergency shelter and counseling for victims of domestic violence in Maury County.
Beginning as a grassroots movement in Columbia, Maury County’s largest city, Center of Hope first came about when the Columbia Business and Professional Women’s Association (BPW) teamed together with the Coalition to bring services to local victims of domestic violence.

Victim of crime or abuse in crisis?